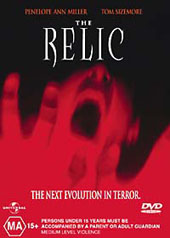 Unavailable
Sorry, this product is not currently available to order
The Relic can be classified as a standard entry in the scary monster movie category. The plot has a few holes and the acting, while not bad, is unexceptional. The story concerns an anthropologist who arrives back from South America with some nasty surprises in store for his museum colleagues back in Chicago. Although the film does not go heavily into the details of its growth into a lethal creature, a horribly mutated monster begins killing the staff of the Chicago museum. Brave detective Lt Vincent D'Agosta played by Tom Sizemore and museum researcher Dr Margo Green - Penelope Ann Miller - work together to try and put an end to the creature's reign of terror. You are provided with frights and moments of suspense, but you can predict the outcome of this film fairly easily. More of the 'frights' in this film seem to come from the audio track than anything else. The film's special effects are pretty good and were not far behind leading edge for their day (1996). The standard 'monster film' style plot notwithstanding, I enjoyed The Relic and no one will fall asleep during it, that I can guarantee. Special features:
Release date NZ
October 13th, 2004
Movie Format
DVD Region
Edition
Aspect Ratio
Director
Peter Hayams
Language
English
Length (Minutes)
105
Stars
Studio
Universal Pictures
Subtitles
Dutch, English - HI
Genre
Original Release Year
1997
UPC
3259190356993
Product ID
1462255