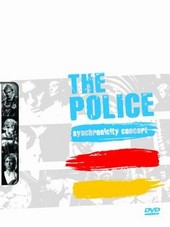 This is the stunning live-in-concert extravaganza filmed during The Police's Atlanta leg of their 'Synchronicity World Tour' in November, 1983. Exclusive to this DVD are the 4 previously unseen multi-angle tracks -- "Synchronicity II", "Roxanne", "Invisible Sun" and "Don't Stand So Close to Me". As an additional treat, this DVD also includes the original concert trailer and a rare interview with the band from their final concert in Melbourne, Australia 1984.

Originally directed and edited by Godley & Creme, this energetic and power-packed live concert brilliantly captures The Police at the height of their success, when Synchronicity ruled airwaves and the trio were one of the biggest bands in the world.

The songs performed during the concert include their most memorable hit singles including "So Lonely", "Roxanne", "Message in a Bottle", "De Do Do Do De Da Da Da", and "Every Breath You Take", plus several songs taken from the 'Synchronicity' album including "King of Pain", "Wrapped Around Your Finger", "Walking in Your Footsteps", "Tea in the Sahara" and "O My God".

"Although 'Synchronicity' would be the Police's most commercially successful, and lead to a sold-out tour (including New York's Shea Stadium), it would turn out to be the trio's fifth and final studio album and world tour. One of 1983's biggest singles, the haunting "Every Breath You Take" is an obvious highlight, as well as other hits -- the cacophonous rocker "Synchronicity II", plus the far more temperate "Wrapped Around Your Finger" and "King of Pain". Also included are the oft-overlooked tracks "O My God," "Synchronicity I" (used as a concert opener on the ensuing tour), "Tea in the Sahara", "Murder by Numbers", and the Stewart Copeland original "Miss Gradenko". Few other albums from 1983 merged tasteful pop, sophistication, and expert songwriting as well as Synchronicity did, resulting in yet another all-time classic."
-GREG PRATO