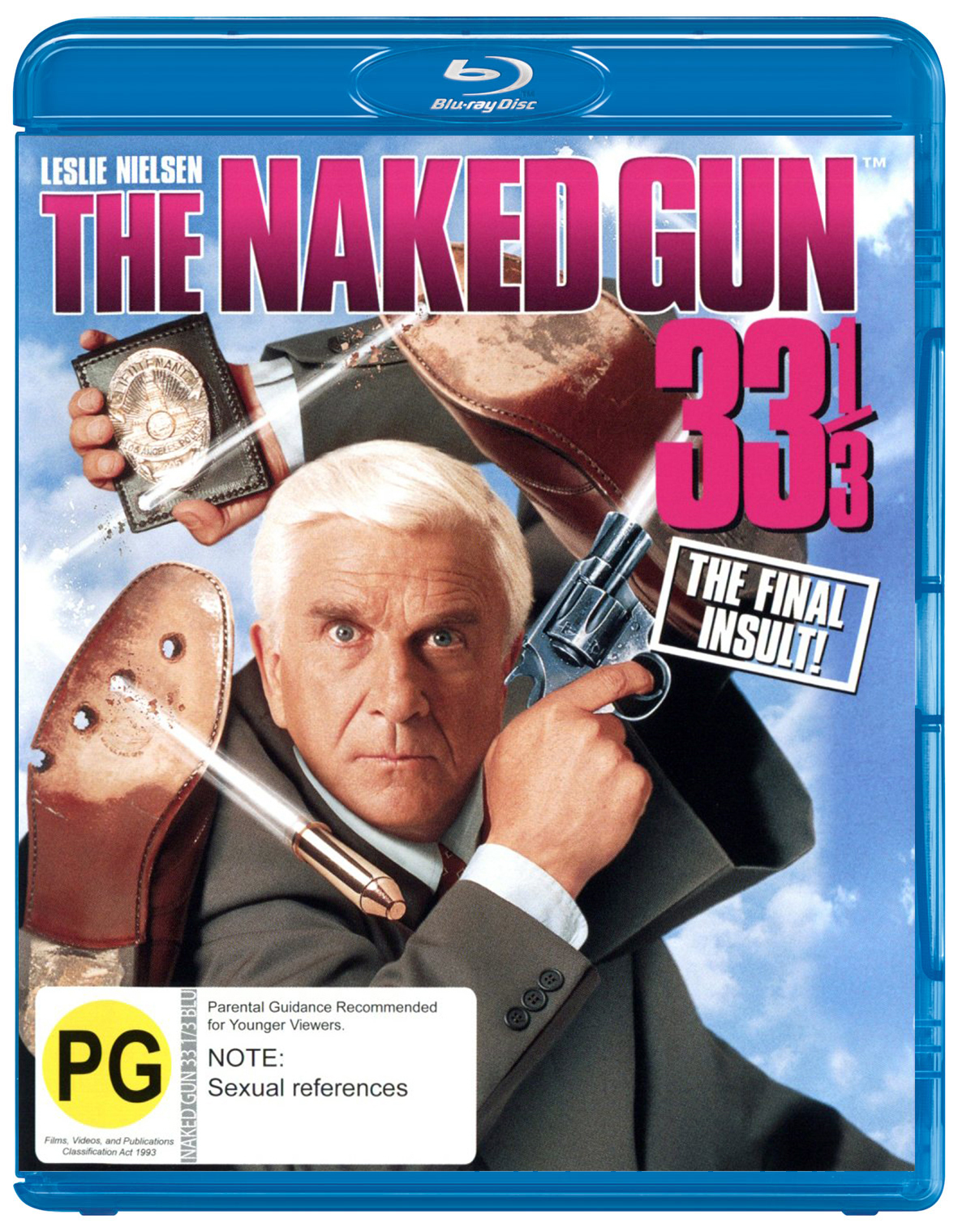 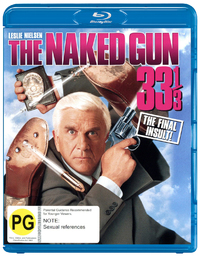 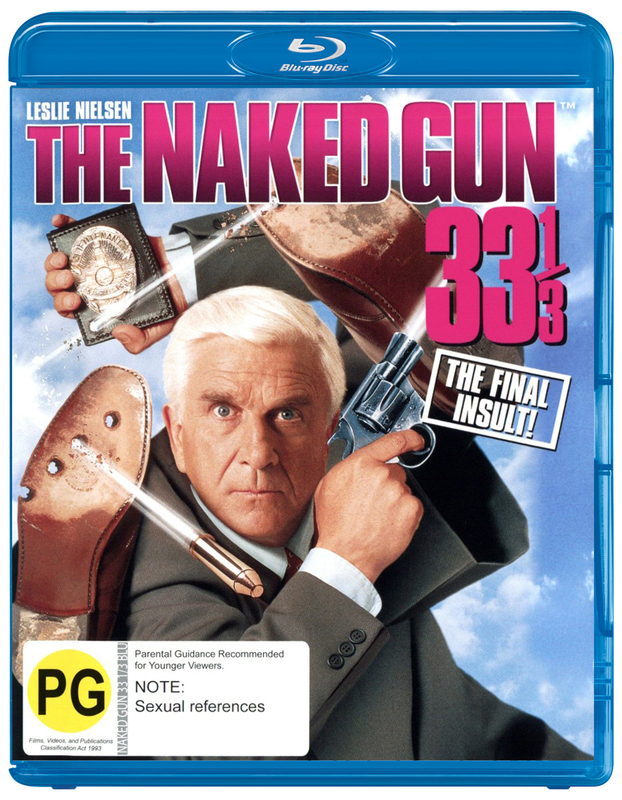 The final film in the Naked Gun series. The Naked Gun 33 1/3: The Final Insult is a 1994 comedy film starring Leslie Nielsen as the comically bumbling Police Lt. Frank Drebin. Priscilla Presley plays the role of Jane, with O.J. Simpson as Nordberg (in his last role before being tried for murder).

Frank Drebin is persuaded out of retirement to go undercover in a state prison. There he is to find out what top terrorist, Rocco, has planned for when he escapes. Frank's wife, Jane, is desperate for a baby.. this adds to Frank's problems. A host of celebrities at the Academy awards ceremony are humiliated by Frank as he blunders his way trying to foil Rocco.

"Leslie Nielsen, like Steve Martin, tends to ingratiate himself to us because he's almost handsome. But for a slip of Mother Nature's scalpel in the schnozzle vicinity, he would look like a powerful white patriarch. Nobody makes an easier – and some, not I, but some would say more deserving – target than those white guys in suits.

Ergo, the triumphant return of Nielsen in “Naked Gun 33 1/3: The Final Insult,” directed by Peter Segal and produced and co-written by David Zucker, who with partners Jerry Zucker and Jim Abrahams created these films from “Police Squad,” the TV series. David Zucker and Segal seem to thrive on the formulaic tomfoolery that propels these rapid-fire spoofs.

“Naked Gun 33 1/3,” as pointlessly plotted as ever, manages to be not only still funny but energetically slapped together and occasionally inventive. It opens with an intricately choreographed parody aimed at both high and low comic thresholds. A restaging of Brian DePalma's homage to the Odessa Steps sequence from Sergei Eisenstein's “Potemkin,” it features a veritable calvary charge of baby carriages. In hot pursuit are President Clinton, the pope and an Uzi-packing posse of disgruntled postal workers.

Zucker has less success zinging “Thelma & Louise,” “The Crying Game” and prison movie conventions – the last of which have already been unintentionally ribbed by the likes of Sly Stallone. The dropping-the-soap-in-the-shower scene is overgrown with mold, but Lt. Frank Drebin (Nielsen) still bends over.

Drebin, protected from potential admirers by a pair of iron pants, goes to prison undercover to befriend Rocco (Fred Ward), a terrorist who's being paid $5 million to blow up the Academy Awards. “This will embarrass the United States more even than Tonya Harding,” says the fiend representing whoever it is who wants to explode the Oscars. A band of disgruntled losers? It's never clear.

Whatever. In his idiotic efforts to defuse the bomb, Drebin creates a blast on his own. The good lieutenant wreaks havoc on the ceremonies and its participants: Pia Zadora sings, dances and lands head first in a tuba, while Raquel Welch first swallows and subsequently spits up her microphone.

Priscilla Presley, who reprises her saucy role as Mrs. Drebin, alas is almost lost in a failed subplot aimed to send up the conventions of childless heroines with baby angst. The good news: Frank is shooting blanks and so must visit the sperm bank to make a series of donations. These are aided by the presence of a top-heavy nurse (Anna Nicole Smith), who also happens to be Rocco's moll. Smith, 1993's Playmate of the Year, adds dramatic tension in that she appears in constant danger of toppling over or spilling out. “Naked Gun 33 1/3” has its share of shortcomings – but Ms. Smith's endowments are not one of them." The Washington Post