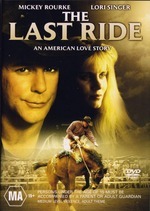 A man trying to escape his criminal past becomes involved with woman born under a bad sign in this fast-paced crime drama. Frank T.Wells (Mickey Rourke - "Angel Heart", "Once Upon a Time in Mexico") has just been released from prison after spending ten years for manslaughter, the conviction stemming from an act of selfdefence. Frank wants to rebuild his life and start his own ranch; to raise money he begins riding the rodeo circuit. While on the road, Frank meets a woman named Scarlet Stuart (Lori Singer - "Footloose"), who has "F.T.W." tattooed on her hand (though it means "F--k the World"). Scarlet was both partner in crime and unwilling lover to her brother Clem (Peter Berg - "The Last Seduction") who recently died after shooting four people in a bank holdup. When Scarlet discovers Frank's initials are F.T.W. she believes it means that they were meant to be together and they quickly fall into a relationship as Scarlet supports herself the way she knows best, armed robbery. Now Frank must decide whether fate has sent him the woman with whom he can rebuild his life, or whether it has dealt him a hand which will send him straight back to jail, or perhaps even worse.