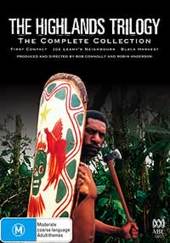 Most of our information about the first contact between white explorers and the indigenous people of the lands they entered are confined to written reports – mostly by the explorers. In ‘First Contact’ the Leahy brothers filmed their encounters with the highlanders of New Guinea and the natives give their first impressions of the white men. The second two videos follow the mixed race son of one of brothers in his frustrating struggle to work with the local tribe to run a successful coffee plantation.

Set in the Papua New Guinea Highlands and shot over ten years, First Contact, followed by Joe Leahy's Neighbours and Black Harvest have won 30 national and international awards, including an Academy Award® nomination for First Contact.


First Contact is a classic film of cultural confrontation, as compelling today as when first released nearly 20 years ago. Columbus and Cortez left no visual record of their first contact with the New World, but when Australia's gold prospecting Leahy brothers first penetrated the unexplored New Guinea Highlands in the 1930s, they carried a camera, capturing on film the last great confrontation between two cultures that will ever again take place on Earth.

"…a documentary classsic and one of the great achievements of Australian cinema. It comes as close to perfection as any work by Australian filmakers….a work of art as well as a dazzling exercise in anthropology and journalism." - Neil Jillett, Chief Film Critic, Melbourne Age

Joe Leahy’s Neighbours traces the fortunes of Joe Leahy, mixed-race son of Australian explorer Michael Leahy and a highland woman, and follows his uneasy relationship with his tribal neighbours, the Ganiga. Raised in the village but educated by the colonial whites, Joe has his feet in two cultural camps.