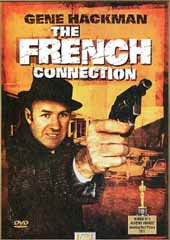 Unavailable
Sorry, this product is not currently available to order
William Friedkin's gritty police drama portrays two tough New York City cops trying to intercept a huge heroin shipment coming from France. An interesting contrast is established between 'Popeye' Doyle, a short-tempered alcoholic bigot who is nevertheless a hard-working and dedicated police officer, and his nemesis Alain Charnier, a suave and urbane gentleman who is nevertheless a criminal and one of the largest drug suppliers of pure heroin to North America. During the surveillance and eventual bust, Friedkin provides one of the most gripping and memorable car chase sequences ever filmed.

William Friedkin's classic policier was propelled to box-office glory, and a fistful of Oscars, in 1972 by its pedal-to-the-metal filmmaking and fashionably cynical attitude toward law enforcement. Gene Hackman's Popeye Doyle, a brutally pushy New York City narcotics detective, is a dauntless crime fighter and Vietnam-era "pig," a reckless vulgarian whose antics get innocent people killed. Loosely based upon an actual investigation that led to what was then the biggest heroin seizure in U.S. history, the picture traces the efforts of Doyle and his partner (Roy Scheider) to close the pipeline pumping Middle Eastern smack into the States through the French port of Marseilles. (The actual French Connection cops, Eddie Egan and Sonny Grosso, make cameo appearances.) It was widely recognized at the time that Friedkin had lifted a lot of his high-strung technique from the Costa-Gavras thrillers The Sleeping Car Murders and Z--he even imported one of Costa-Gavras's favorite thugs, Marcel Bozzuffi, to play the Euro-trash hit man plugged by Doyle in an elevated train station. There was an impressive official sequel in 1975, French Connection II, directed by John Frankenheimer, which took Popeye to the south of France and got him hooked on horse. A couple of semi-official spinoffs followed, The Seven-Ups, which elevated Scheider to the leading role, and Badge 373, with Robert Duvall stepping in as the pugnacious flatfoot. --David Chute
Re-released on
April 4th, 2005
Movie Format
DVD Region
Edition
Aspect Ratio
Director
William Friedkin
Language
English
Length (Minutes)
99
Stars
Studio
20th Century Fox
Subtitles
Czech, Danish, Finnish, Hebrew, Hungarian, Icelandic, Polish, Norwegian, Portuguese, Swedish, Turkish, English - HI
Supported Audio
Genre
Original Release Year
1971
Box Dimensions (mm)
135x190x14
UPC
9321337026121
Product ID
1458779