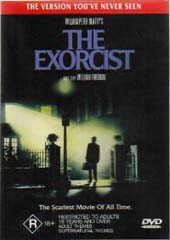 The scariest movie of all time has returned. In the version you've never seen before.

Based on the 1971 novel by William Peter Blatty, The Exorcist marries three didifferent scenarios into one extraordinary plot. A visiting actress in Washington, D.C., notices dramatic and dangerous changes in the behavior and physical make-up of her 12-year-old daughter. Meanwhile, a young priest at nearby Georgetown University begins to doubt his faith while dealing with his mother's terminal sickness. And, book-ending the story, a frail, elderly priest recognizes the necessity for a show-down with an old demonic enemy.