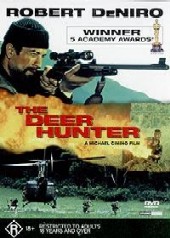 One of the most widely acclaimed films of all time.

The Deer Hunter is Michael Cimino's celebrated interpretation of the stresses and dangers – both physical and emotional – which confront a trio of Pennsylvanian steel-workers when they are sent to fight in the horror that was the Vietnam War.

Michael, Steven and Nick are young factory workers from Pennsylvania who get drafted to fight in Vietnam. Before they go, Steven marries the pregnant Angela and their wedding-party is also the men's farewell party. After some time and many horrors the three friends fall in the hands of the Vietcong and are brought to a prison camp in which they are forced to play Russian roulette against each other. Michael makes it possible for them to escape, but they soon get separated again.