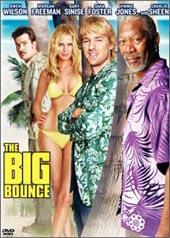 Who's scamming who? A comedy about taking a chance on paradise.

Surfer/drifter/con man Jack Ryan (Wilson) makes his way to Hawaii and lands a job caring for an Walter Crewes (Freeman), a judge on the island. His new gig leads to an involvement with an beautiful, enterprising woman (Foster), who's really the lover of a real estate tycoon (Sinise) – a shady businessman and longtime rival of Judge Crewes. Ryan, naturally, has to choose between the woman, the money, or the honorable path.