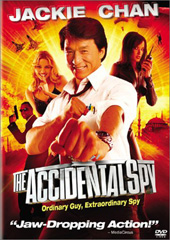 Jackie Chan returns to dazzling form! If you've watched Chan's Hollywood movies (Rush Hour, Shanghai Noon) and been unimpressed, The Accidental Spy is a good introduction to the astonishing fights and extraordinary stunts that make Chan's Hong Kong films such events. Chan plays an exercise-equipment salesman who turns out to be the missing son of a Korean double agent who's connected with drug lords in Turkey who have developed a super-addictive opium–got all that?

The plot is largely nonsensical, a series of implausible escapades that frame the action; but what the movie lacks in logic, it makes up for in spectacle, ranging from a burning runaway truck cascading off a bridge to a stark-naked Chan pursued by thugs in a Turkish bazaar, defending himself with every implement in sight.