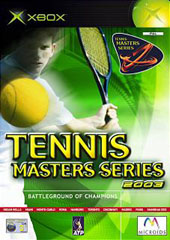 Due to COVID-19, we're unable to accept new orders at this time. Learn more...
Travelling to the hard courts of Indian Wells, Miami, and Toronto, or visiting the luxurious clay courts of Monte Carlo, Rome and Hamburg, players tour the globe, taking part in the nine faithfully reproduced Masters Series tournaments. The aim, not surprisingly, is to qualify for the Tennis Masters Cup in Shanghai and become the world's number one.

An intuitive control system puts four different shots at the player's disposal (top spin, slice, flat and lob) enabling over 60 moves to be accessed during gameplay. 67 different players are available in all, each with his or her individual skills and style of play.

On the graphical side of things, play is brought to life by an engine that builds 6,000 polygons per player. This, coupled with the 500 individual motion-captured moves makes for detailed faces, skin and clothing, as well as a range of facial animations. Real-time dynamic lighting sheds some light on the proceedings, offering three different times of day to choose from: noon, 5PM and nighttime.

Technical data aside, Tennis Masters Series is a comprehensive title, assisted well by the number-crunching power of the Xbox. If tennis games are your cup of tea, then this is worth a look.
Release date NZ
November 5th, 2002
Game Platform
Publisher
Vivendi
UPC
3342185906812
Product ID
1457760