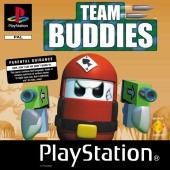 Due to COVID-19, we're unable to accept new orders at this time. Learn more...
Mature: Suitable for mature audiences 16 years of age and over.

Build up your team by collecting and stacking crates together, then kick ‘em open to reveal more buddies, weapons and vehicles – just what you need to launch an explosive assault on your opponents. The inflatable friends may look cute but they have a vicious streak, so beware! Prepare to wreak utter havoc as you attack the enemies bases and bring their crate stacking to a screeching halt; charging in with guns blazing and cannons firing!

Team Buddies features chaotic multi-player gaming for up to four players on the PlayStation via quad-screen. With buddies like these – who needs enemies?