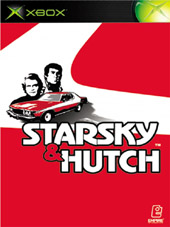 Due to COVID-19, we're unable to accept orders for non-essentials items at this time. Learn more...
Following the style of the TV show the game won't just simply be another driver/shooter. In each level you'll have to maintain viewer ratings (VR) that acts like a timer. Saunter around Bay City carefully obeying the speed limit and people will switch off with boredom; reproduce the over the top driving of the cult duo performing corner slides and ploughing through every cardboard box infested alley that gets in the way and your ratings will soar.

And we wouldn't like to break up the partnership so although the game can be played in standard one player mode controlling both the driving and the shooting both versions will allow a friend to pick up the controller (light gun support for PlayStation® 2) and blast away while you put the pedal to the metal downtown. But if you are Johnny no mates then an AI Starsky will pop up during the action to give you advice and generally hurl abuse at the crims.