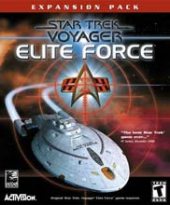 Due to COVID-19, we're unable to accept orders for non-essentials items at this time. Learn more...
Voyager is being attacked by a strange alien ship, and it’s mysteriously transported into a sort of star ship graveyard, where it is stranded without power or systems. You play the part of Voyager’s elite "Hazard Team", and have to defend the Voyager whilst trying to find a way out of the graveyard.

* Ten decks and numerous rooms await, including The Bridge, Engineering, officer quarters, and a secret area accessible only via transporter. Plus, navigate it all using an authentic, working Tricorder.

* New Aliens. get up close and personal with a powerful new alien that has established a stronghold on Voyager. A new Holodeck firing range gives you plenty of practice for confronting this hostile new intruder, as well as old threats.
Release date NZ
June 21st, 2001
Publisher
Activision
Media Format
PC DVD-ROM
Product ID
1456082