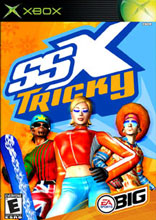 Due to COVID-19, we're unable to accept orders for non-essentials items at this time. Learn more...
Suck up the biggest adrenaline you've ever inhaled with all of your favorite SSX courses! Tweaked for more speed, more elevation, and more insane thrills, also included are two wild new tracks that will blow your mind. Hit the mountain harder with SSX Tricky by EA SPORTS BIG. The sky is your stage.

Yo! Are you afraid of a vertical drop? Can't stand the sting of face-plantin' in the snowpack? Too clumsy to nail the most wicked BIG AIR tricks imaginable? Offended by super-loud, super-fresh jams? Then get off our mountain. The highly anticipated sequel to the award-winning, all-everything SSX is gettin' set to fly off a cliff near you. Tricky is coming straight at you with insane, sick UBER tricks, surreal mind-blowing worlds, and a cast of funky-fresh characters going at it in intense racing rivalries. Blast down the tracks at all-out speeds and suck up the biggest adrenaline you've ever inhaled. It's BIG AIR, BIG TRICKS, and BIG BAD ATTITUDE, with all of your favorite SSX courses tweaked for more speed, more elevation, and more insane thrills, plus two wild new mind-blowing tracks. Hit the mountain harder with SSX Tricky. The sky is your stage.

Two All New Mind-blowing Worlds - Garibaldi is located in British Colombia, Canada, where it’s all about BIG air. Alaska features near-vertical sections and huge drops on what promises to be the scariest, edge-of-your-board course yet.

An International Cast Of Riders - Six all-new competitors plus six riders from the original SSX make up the Tricky circuit.

Intense Racing Rivalries - Knock other players down from behind, throw an elbow to make a little room, or go for mid-air collisions. Do whatever it takes to cross the line first.

Unsurpassed Speed - Flying down the mountain takes on a whole new meaning in Survival mode racing.