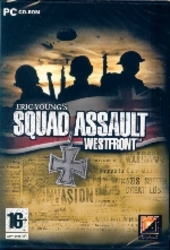 Unavailable
Sorry, this product is not currently available to order
*damaged box stock

Squad Assault is a riveting recreation of World War II tactical combat. Once battle commences, virtual soldiers are at the command of the player, responding with real reactions to the combat situations around them. Psychological modelling combines with unsurpassed detail in terrain, weather, weapons, vehicles and armour to create the ultimate war simulation. Players must evaluate every situation to take full strategic advantage, or suffer a painful defeat.