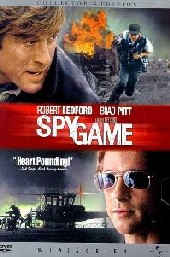 It's not how you play the game. It's how the game plays you.

Set against a world of global intrigue from the Vietnam war through to the end of the Cold War, Spy Game is a story of redemption and friendship between mentor and protégé (Robert Redford and Brad Pitt respectively). In 1991 on the brink of his retirement from the agency, Nathan Muir (Redford) learns that Tom Bishop (Pitt) has gone rogue, jailed overseas on espionage charges and is scheduled to die in 24 hours. Muir decides to take on the most dangerous and personal mission of his life. From Tony Scott, director of Enemy of the State and Crimson Tide.

“…all style and surface, a slick artifact made of quick cutting and the kind of rough glamour you find in fashion ads” -Roger Ebert, Chicago Sun-Times.