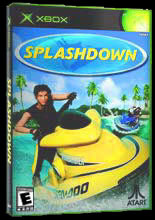 Due to COVID-19, we're unable to accept orders for non-essentials items at this time. Learn more...
Splashdown whisks players to the four corners of the globe through 18 detailed race environments. Racers will blast through the waters of Bali, skim along the Great Barrier Reef and navigate the canals of Venice. The Xbox version introduces two new eye-popping courses, Ruminer Point, Maine and The Keys, Florida, and features bigger waves for players to catch massive air for tricks and jumps. With more than forty tracks and tons of shortcuts and hidden areas, Splashdown is loaded to the gills with a variety of challenges and amazing scenery.

Eight over-the-top characters from around the world take players on a spin around the track. To keep the action hot, each character is armed with special abilities in speed, handling, stunts and agility. Each performs unique stunts like the heart attack, superman and rollover.

Splashdown has three main modes: Career, Versus, and Arcade. In Career mode, the player has the opportunity to prove single-player prowess, building a team and vying for the championship of the water racing circuit. Meanwhile, Arcade mode makes competition personal with four intense events, including Circuit, Time Trials, Countdown and Free Ride. Along the way, players can collect up to five new wetsuits placed around each course. Versus mode pits two players against each other in a head-to-head showdown.