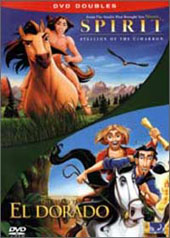 Spirit: Stallion Of The Cimarron:

Set in America's Old West in the nineteenth century, Dreamworks Studio's animation Spirit: Stallion Of The Cimarron follows the adventures of a wild mustang encountering white settlers for the first time who capture him, take him to a U.S. Army fort and try to tame him.

Further along the way the mustang also encounters a kindly Native American called Little Creek and then must face up to a new man made force that threatens to destroy his homeland – the iron horse. The songs are by Bryan Adams.

THE ROAD TO EL DORADO:

Get ready for an exhilarating ride of a lifetime! Join Tulio and Miguel and their hilarious horse Altivo as they set sail, map in hand, in search of golden treasure in The Road to El Dorado.

Upon landing on the shores of El Dorado, the legendary Lost City of Gold, Tulio and Miguel are mistaken for gods and are lavished with riches beyond their wildest dreams! As friendship, loyalty and greed collide, our unlikely heroes must make the decision of their lives: run off with the gold or face unforeseen dangers to save the people of El Dorado!