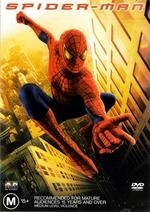 Get Ready For The Ultimate Spin!

Peter Parker was a shy, quiet teenager… until he was bitten by a genetically altered spider. Now, with heightened senses and incredible new abilities, he’s become the amazing Spider-Man. Go for the ultimate spin as the comic book legend comes to life with Tobey Maguire, Kirsten Dunst and Willem Dafoe starring in director Sam Raimi’s action-packed, world-wide box office smash!