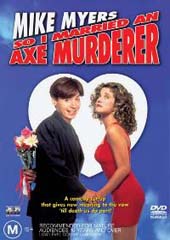 So I Married An Axe Murderer

What do you get when you take an emotional terrorist, a mafia moll and a kleptomaniac? You get Charlie Mackenzie's list of ex-girlfriends!When it comes to his quest for a dream woman, Charlie (Sensational star of AUSTIN POWERS movies, MIKE MYERS) has had some real nightmares. But now he's getting hitched to Harriett (Nancy Travis from THREE MEN AND A BABY) and what's the worst she could be?…and axe murderer?!!!

In the outrageous comedy smash SO I MARRIED AN AXE MURDERER Charlie's fear of being married for life soon becomes a fear of being hacked to death, as the paranoid newly-wed suspects that his heavenly bride is in fact a homicidal maniac.