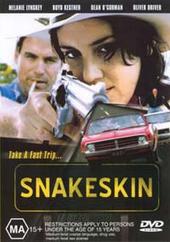 Alice (Melanie Lynskey – Heavenly Creatures) lives, to her dismay, in the suburbs of a flat South Island town. She'd rather be living on Route 66… Fuelled by film and TV, her head is full of American dreams.

Joined by best friend Johnny (Dean O'Gorman) they've cut the roof off an old Valiant and are cruising the New Zealand highways, looking for the kind of trouble Hollywood has taught them to expect… They find their man in Seth (Boyd Kestner), a billboard hunk of American cowboy, with snakeskin boots, a few spare tabs of acid and a trail of enemies. He's a walking myth, too perfect to be real.

American dreams and New Zealand subcultures collide, as three cars race across the plains and into the heart of darkness… All the while trippy euphoria – sweetly enhanced by inspired music choices – gives way to paranoia as the mountains and the night close in.