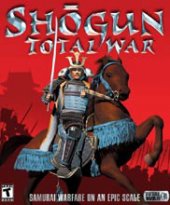 Mature: Suitable for mature audiences 16 years of age and over.

Total War is the complete experience of warfare presented in the most realistic way possible through the use of state of the art technology in graphics and AI. You'll need strategic brilliance to manage your campaign, with the training, recruitment and funding of your armies. You'll need cunning to deploy spies and emissaries to outwit your opponents while maintaining a web of alliances. And you'll need tactical brilliance to take your army out onto the battlefield and crush your enemies.

"If you want realism, historical accuracy, atmosphere and replayability, Shogun: Total War stands head and shoulders above everything else. It breathes new life into a stale genre. Like Championship Manager is to football, and Half-Life is to first-person action, so Shogun is to real-time strategy. The fact that it slaps traditional wargaming across the face by being totally absorbing, realistic and fun is just a bonus." 93% - PC ZONE CLASSIC AWARD

"As accessible and fun as C&C, but with vast scope and grand aspirations." PC Player - 94%

"Shogun Total War is nothing short of a revelation. It provides scope and depth unprecedented in the genre."
"A benchmark strategy game which fundamentally redefines the genre."
"The computer AI is the best I've ever seen."
"You're in for a rare treat - Brilliant!"
-- PC Strategy Games - 9 out of 10

Feudal Japan: a time of immense bravery, loyalty and courage, and a time of deception, betrayal and murder.


Enter the world of Shogun: Total War the most ambitious, epic, and visually spectacular real-time strategy game ever created.


Battle to the death for the ultimate honour: become Shogun, supreme dictator of all Japan. Epic Scale Command vast armies of thousands of troops on vast battlefields.


Total Warfare Simulation: Strategic campaigning and tactical action add up to a full and realistic simulation of warfare in 16th Century Japan.


Tactical Action: Fight it out in real-time - army to army, unit to unit, man to man.


Breathtaking Panoramic 3D Landscapes: Battle over photo-realistic terrain, stretching as far as the eye can see.


Genetic AI Computer: AI players genetically evolve, learning and adapting to your style of play. Every time you play, the AI learns your tactics and evolves to defend against them.


Individual AI: Even within vast armies, soldiers have their own AI, each acting according to his own honour, moral, and skill-rating.


16th Century Japanese Setting: The whole Samurai era recreated in exquisite detail. The characters in the game are real, but their exploits are unbelievable.


Historically Brutal: This was one of the most brutal periods in human history, but also one of the most cultured and artistic. Shogun portrays the period with maximum historical accuracy.


Customisable strategy/action mix: Various options allow the gamer to blend strategy and battle gameplay. Play either the strategy components, the battle components, or both in historic missions, two-player head to head battles or full campaigns.


Numerous Multiplayer Options: Multiplayer gameplay options include a unique play-by-email feature, Internet gaming and LAN support. No Console Compromises. This game will not run on current platforms. Only a PC can hack it.