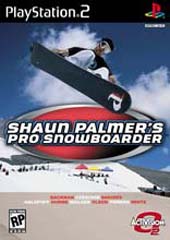 Unavailable
Sorry, this product is not currently available to order
This title is 2nd hand and includes the case, manual and CD. All second hand games are 100% guaranteed.

Shaun Palmer's Pro Snowboarder is real life racing and freestyle snowboarding featuring living legend and six-time Winter X-Games gold medallist Shaun Palmer and 9 of the most bad ass names in the sport. Players race down the slopes of real world locations pulling hundreds of authentic trick combos. The game has expansive interactive environments allowing players to not only explore hidden and secret areas but stick tricks off anything in sight. Immediately playable yet challenging, it is a competitive, authentic and aggressive snowboarding game that will keep even the most hardcore Snowboarders and gamers hyped.

Overview
Shaun Palmer's Pro Snowboarder is so over the edge authentic you may consider selling lift tickets to your friends. Ride like the self-declared "world's greatest athlete" as featured in the cover story of USA Today - Shaun Palmer or one of 9 top pro snowboarders in intense freestyle game play. With innovative game features, real-world snow resorts, detailed graphics and intuitive controls, Shaun Palmer's Pro Snowboarder will give you all the intense action of snowboarding without those annoying lift lines. Who's competing for 2nd?