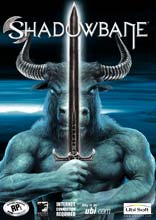 Unavailable
Sorry, this product is not currently available to order
Shadowbane is set in the genre of dark fantasy. After millennia of strife, toil, and struggle, Aerynth suffered a massive catastrophe from which it has yet to recover... Players are born as children of this new Dark Age, known to the inhabitants as the Age of Strife, and the game begins approximately one hundred years after the near-complete collapse of the civilized world.

Shadowbane is the first MMO to deliver the ULTIMATE CHALLENGE by offering a role where the player has the abilility to affect the world in a dynamic experience.

Darkness has fallen upon the world of Aerynth. Only a century ago the Elves and the Sons of Men fought their final battle, a battle so terrible that Aerynth itself was shattered, and all of the world’s children were plunged into an Age of Strife. The ancient Gods have grown silent, and glorious empires that spanned millennia have all crumbled into dust. Strife and Chaos reign supreme as the survivors carry on ancient feuds or turn upon old allies, fighting for the scraps of the broken world.

Yet all the while the shadows lengthen, as ancient evils stir in forgotten places, hungry for blood and vengeance. In her darkest hour, Aerynth needs heroes, heroes who can forge new empires, heroes who will stand against the coming darkness. The Doom of Aerynth draws near, but a name out of ancient legend offers salvation to a sundered world: Shadowbane. If it can only be found, this Sword of Destiny will give its wielder the power to save the world… or to destroy it.