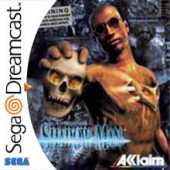 Due to COVID-19, we're unable to accept new orders at this time. Learn more...
Mature: Suitable for mature audiences 16 years of age and over.

You must hunt five serial killers in Liveside, and transform into Shadowman to eliminate the murderers in Deadside in this dark action game form Acclaim. Use powerful voodoo magic and cool weapons to take out your enemies.

* Vanquish your enemies. Go in armed with voodoo power like the Magnum Desert Eagle! The Violator! The Flamebeau! The Calabash! And many more!

* Unravel the Dark Mysteries. More than just another action/adventure. Gather Voodoo artifacts - eyes, ears, nail clippings, necklaces of human teeth and the Govi - in order to solve the mysteries of Deadside.

* Hunt Villains across Two Worlds. Travel between two worlds -- Liveside and Deadside. Hunt villains in the Louisiana Bayou, New York ghettoes, a Texas Prison, the London Underground, and the Asylum.

* Deep Storyline and Dark Thrills. Over 40 cut scenes and hours of in-game speech move you through ShadowMan's complex history and guide you in this dark psychological thriller.