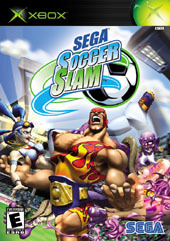 Due to COVID-19, we're unable to accept orders for non-essentials items at this time. Learn more...
SEGA Soccer Slam: It's a kick-off revolution…and the pitch will never be the same! A host of outrageous teams from across the globe unite on the pitch for intense, three-on-three matches of the world's most popular sport. Users will be enticed by thrilling gameplay action involving nasty tackles, lethal killer kicks and brilliant spotlight maneuvers. In the unique and deep Quest Mode, players take their selected team through a series of matches, unlocking secret stadium locations and gaining access to hidden items that improve player attributes.

Users will also be able to save their enhanced player attributes earned through Quest Mode for use in the other game modes, expanding their gameplay exponentially. Alternative gameplay options include Arcade Mode, Challenge Mode and a round-robin Tourney Mode with sizzling multiplayer action for up to six users. With the built-in Practice Mode, users have the opportunity to become experts in "SEGA Soccer Slam's" insane special maneuvers: spotlight shots, deadly killer kicks, dekes, hits, steals, headers and special team specific power-up moves. This isn't ordinary soccer…and with additional user-controlled features such as weather and difficulty levels, players can create the ultimate match of champions.