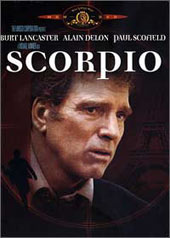 Burt Lancaster (Atlantic City) and Alain Delon (Purple Noon) star in this intriguing story of espionage. Convinced that CIA agent Cross (Burt Lancaster) is leaking secrets to the Soviets, the agency hires Scorpio (Alain Delon), a lethal assassin, to eliminate him. Now the two men are locked in a game of cat-and-mouse, with a deadly climax. With fascinating plot twists and great performances from the two leads, “Scorpio” is a thrilling Cold War drama.