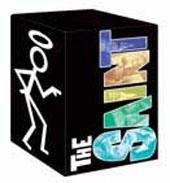 What a wonderful trip back to a time when women wore beehives, and men were – manly! And just slightly greased.

The cars! The cute ‘foreign’ accents (masking their original British ones, of course!!)! Ronnie Corbett and Oliver Reed as swarthy Italians, well, in Reed's case anyway…

A delightful romp in a kind of 1960s fantasy land. And with a usually witty script and a certain level of suaveness always present with the irrepressible Sa­int.

The Saint was one of the most influential TV series throughout the sixties. Now firmly established as a cult classic, The Saint continues to have huge following. This series gave Moore his training ground for his Bond days, and many consider his character, Simon Templar (aka The Saint), a timeless hero…
You could call The Saint a modern day Robin Hood -he steals from wealthy criminals to give -to himself (anyone would be surprised he wasn't an 80's icon…).
However he does not just think of himself, and he is also generally concerned with getting the 'baddies' (which he has stolen from) put behind bars. Despite the help he gives to the police in getting criminals arrested, Chief Inspector Claude Eustace Teal (Ivor Dean) sees him only as a common thief. And so, The Saint needs to always be that one step ahead…