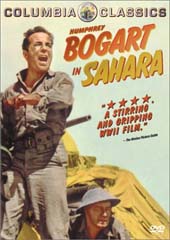 There`s plenty of top-rate explosive action in this 1943 “Bogie” classic about a rag-tag battalion of American, British, French, Australian and New Zealand soldiers stranded in the African desert during World War II. After the fall of the Libyan city of Tobruk, Sergeant Joe Gunn (Humphrey Bogart from THE CAINE MUTINY) and his crew – “Waco” Hoyt (Bruce Bennett from CASABLANCA), Fred Clarkson (Lloyd Bridges from THE RAINMAKER) and Jimmy Doyle (Dan Duryea from SCARLET STREET) – retreat in their tank across the Sahara. Along the way they pick up six allied stragglers and Tambul (Rex Ingram from ELMER GANTRY), a Sudanese corporal and his Italian prisoner. Tambul directs the group to a desert fortress, where they find desperately needed water. When a 500 strong detachment of German soldiers arrive, and is subsequently denied water, Gunn must lead his small group of weary men in a desperate battle. A top quality film that is an unrelenting and brutal statement of war and its cold reality.