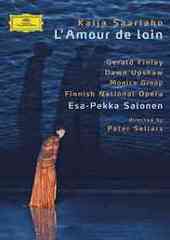 Unavailable
Sorry, this product is not currently available to order
L’amour de loin was named “Best New Work of the Year” by The New York Times in 2000. NYT critic Anthony Tommasini wrote that the “haunting and beautifully colored score, while nodding to Debussy and Messaien, is deeply personal and utterly accomplished.” The world premiere of the opera L’amour de loin at Salzburg in 2000 made Kaija Saariaho one of the world’s most prominent composers. No other Finnish work has been as well-received or highly acclaimed by the international press. Peter Sellar's spectacular Salzburg-production has been recorded and filmed by DG for DVD on 18 September 2004 in Finnland The story of the opera, dating from the 12th century, is one of tragic longing: Jaufré the troubadour and Clémence love each other from afar, and when they meet at last, Jaufré dies in the arms of his Countess. Saariaho’s yearning music draws on ancient troubadour songs while invoking both fragile melodies and energetic bursts of music to frame this tragic love story. "The score was in the expert hands of Esa-Pekka Salonen, who has worked with Saariaho throughout their professional lives. The orchestra responded with astonishing finesse. Dawn Upshaw was at her very best both vocally and dramatically, and her long final monologue was the most sublime scene I have witnessed in contemporary opera. Gerald Finley gave an excellent performance. Monica Groop's performance was in accord with the general high quality of the production - which is saying a lot. "L'Amour de loin" promises much for opera of the third millennium." The Opera Magazine The first opera of the famed contemporary composer, Kaija Saariaho held the stage at the Théàtre du Châtelet on the 26, 29 November and 2 December. With Kent Nagano and the Orchestre de Paris in the pit, it was the first French performance of L’Amour de loin (The Love from Afar). Critically acclaimed at its first performance at the Salzburg Festival in August 2000, it is also scheduled for the Santa Fe Opera Festival. Saariaho (b. 1952), a Finnish composer currently living in Paris, is yet another of a remarkable group of composers from this small country to achieve considerable notice internationally. Her opera is a passionate and delicate paean to love with exotic harmonies and magical instrumental colours. It reminded me more of the Impressionist composers rather than compositions of her mentor, Pierre Boulez. Telling a story of a troubadour in love with a distant Countess of Tripoli, it is filled with intimations of Arabic musical forms. Written by the composer specifically for the remarkable soprano Dawn Upshaw as the Countess of Tripoli, Clémence, it also features the excellent baritone, Gerald Finley, as the medieval troubadour Jaufré Rudel. The third member of the cast is mezzo Lilli Paasikivi as a pilgrim who acts as the go-between to unite the lovers. The chamber choir Accentus joined the Orchestre de Paris, discerningly conducted by Nagano. Singing from the highest balconies, they added an often unearthly and affecting accompaniment to the stage action. This opera is burdened from the beginning by a story with very little action and much reflective musical thought. Her talent as a composer is clear and one can hope that later efforts will involve more complex and dynamic musical expressions than the languid and ultimately static nature of this work. The staging, by the ever-adventurous Peter Sellars, had to be adopted from the vast spaces of Salzburg’s Grosses Festspielhaus but seemed to work well on the Châtelet stage. The golden spiral staircase of the Countess descending from the sky was particularly impressive. Dawn Upshaw earns further laurels for her performance here. An untiring proponent of contemporary music, she adds still another impressive role to her already full list in the service of new music. Gerald Finley, last seen in Paris in the title role of Don Giovanni, is certainly destined to be one of the major baritones of his time and sang with passion and nuance. Lilli Paasikivi also contributed to the overall high performance level. This listener, for one, will certainly be waiting for Saariaho’s next operatic effort. With an improved dramatic emphasis, she could very well create some of the best operas of our time.
Release date NZ
April 20th, 2006
Movie Format
DVD Region
Edition
Aspect Ratio
Studio
Universal Music
Supported Audio
Genre
UPC
0044007340264
Product ID
1517522