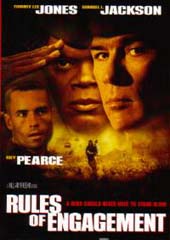 Colonel Terry Childers is a patriot and war hero. But when a peacekeeping mission he leads in Yemen goes terribly wrong, he finds himself facing a court-martial. Accused of breaking rules of engagement by killing unarmed civilians, Childers' only hope of vindication rests with comrade-in-arms Hays Hodges, a military lawyer of questionable abilities.

Together they face the battle of their lives.