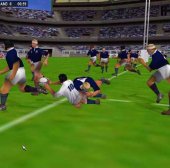 Due to COVID-19, we're unable to accept orders for non-essentials items at this time. Learn more...
EA SPORTS Rugby will now be launching in July to ensure the best possible product is delivered to the market place. The extra time we are spending on the development will make the wait worthwhile. We have decided not to launch the PC demo until just before release for the same reason. Our sincere apologies for not releasing the demo on time as promised.