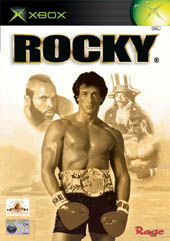 Due to COVID-19, we're unable to accept orders for non-essentials items at this time. Learn more...
Rage has exclusively licensed the computer and video game rights from MGM Interactive to produce a series of games based on the critically acclaimed Rocky movie anthology. The Rocky series will be recaptured and brought to life on consoles. The original Rocky film starring Sylvester Stallone earned an Academy Award for Best Picture in 1976, and went on to gain worldwide recognition as one of the greatest feel good movies of all time. To commemorate the titles 25th anniversary, MGM have released a special edition of the Rocky Gift Set.