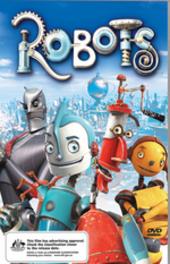 My daughter (nearly 5yrs) loves this movie, it's her new favourite! To my surprise my son (nearly 3yrs) likes it too. It's a popular one for movie night with jokes on different levels to make it enjoyable for the whole family. Great value for money on Mighty Ape!

Fantastic movie for the kids.

There's no doubt that Blue Sky Studios (creators of Ice Age) are a force to be reckoned with in the world of 3D animation, giving animation legends Pixar a run for their money.

Not only is this movie incredibly well animated but the ideas and concepts that serve to drive the story are very clever and well thought out. The locations – particularly Robot City – are nothing short of stunning in their realization with incredible attention to detail. It definitely begs for repeated viewings.

Voice acting is well done – Ewan McGregor's voicing of Rodney is spot on with that right blend of naivety, sense of purpose, and sheer wonderment. Robin Williams provides some fine comedic touches to his character.

Not only a fantastic movie for the kids (they'll just eat this up) but for those of us that are still touched by wonder. Breakdancing robot anyone?

It’s very much a nuts and bolts world in Robots – the new animated feature from the makers of Ice Age. Shifting their focus from that prehistoric period to a much more futuristic-looking one, they have come up with a sci-fi comedy adventure brimful of enjoyable characters voiced by a top-notch cast.

Robots is the title – plain and simple – and robots (or ‘bots as they are called) are the stars…all kinds of weird and wonderful mechanical marvels. Rodney Copperbottom (voiced by Ewan McGregor) is the hero of the story. He’s an inventor who wants to escape from the small town where he lives and expand his horizons by making the world a better place and helping other robots with his clever inventions. At the moment Rodney works in a restaurant where his dad is a dishwasher – the front-loading kind!