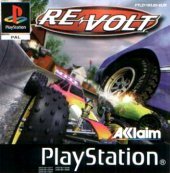 Due to COVID-19, we're unable to accept orders for non-essentials items at this time. Learn more...
Control 1 of 28 remote control cars through insane race tracks set in unusual environments. Environments are bigger then life! This is extreme racing in the vein of Micromachines and RC Pro-Am. For years, Toy-Volt has been producing toys and games for children all over the world. Within months of introducing their first products, Toy-Volt shot to the top! No one could put their finger on exactly what it was that made the toys so popular. Sure, they employed the best designers and marketers in the world, but there was something else about Toy-Volt toys, something almost.... magic.

With their latest product, it appears that they've used a little too much of that special something, because the radio controlled cars just off the production line have gained minds of their own! Escaping from the shelves that held them prisoners, the RC (radio controlled) cars have escaped into the real world, and they're heading your way! Brand new models, old favorites, even some experimental prototypes--the entire product line of RC cars from the fine folks at Toy-Volt has come out to play! They're causing plenty of chaos as they test their new-found freedom! You'll be racing inside, outside, upside down and backwards!

These RC cars are fast and spunky, each with different qualities and looks. As you progress, you'll unlock more and more cars to race and more and more courses to race on! Of course, sometimes the Toy-Volt cars don't play nice, making for lots of lightning fast laps where you've got to fight oil with oil and ball bearings with ball bearings! You'll be racing around the neighborhood, around the supermarket-to places you only dreamed of racing an RC! Like on the track you dream up using the Track Editor. Or maybe on the pitching decks of a huge ship! Or maybe you'll be good enough to unlock a Reverse Mirrored Track! But why waste time talking about all the fun when you can start having it ?!