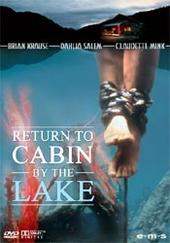 Return To Cabin By The Lake

This is a story where a screenwriter enacts his own murderous screenplay (as he's writing it in the same mountain town where pre-production for the film is already going on), the now presumably dead and posthumously legendary writer-killer sneaks back on the set of the now-in-production movie (in 3 different clever disguises) and ever-so ironically discusses himself with everyone.