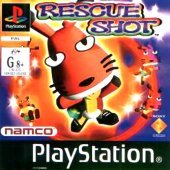 Due to COVID-19, we're unable to accept orders for non-essentials items at this time. Learn more...
Time to dust off the Guncons, gang. Namco is back with another shooter that takes a different tack from its Point Blank series. Less reliant on pinpoint accuracy, much like Time Crisis, and focusing more on the crazy game dynamics of its unique gameworld, Rescue Shot is a lighthearted quest that looks very promising indeed.

The main character in the game is Bow, a dog who wanders through a fairy tale-esque land where all sorts of minions try to hamper his progress. In fact, they downright try to squish his hairy little heinie. The only thing between Bow and an early dog-grave is you and your rescue shots. You essentially shoot every enemy, projectile, and even poisonous mushrooms that come his way.

Tons of items in the background, from mushrooms to spiders and flowers (and even windows), can be shot to reveal power-ups of all sorts. Occasionally you have to shoot Bow in the derriere to get him to jump over obstacles, or a timely shot to the head will cause him to duck flying objects. The game is filled with the variety found in Point Blank, while offering a 3D environment like Time Crisis.
Release date NZ
May 18th, 2000
Publisher
Namco
Product ID
1455366