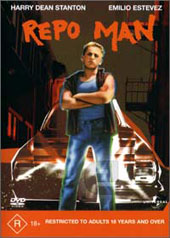 The youth cult classic from 1984, Repo Man is a dark comedy thriller that explores the seamy, seedy LA underworld. Otto (Emilio Estevez – The Breakfast Club) is a disaffected punk wandering the LA streets before Bud (Harry Dean Stanton – Paris, Texas), a repossession man, offers him money to drive a car out of a bad neighbourhood. Soon enough, Otto is earning big money under Bud’s tutelage but their latest repo job lands them in hot water when a nuclear physicist leaves something toxic - a nuclear device? an alien? – in the trunk of a 1964 Chevy...