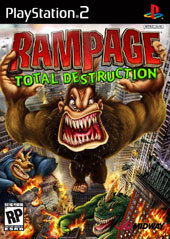 Unavailable
Sorry, this product is not currently available to order
Rampage: Total Destruction offers a fresh take on an arcade classic complete with everyone's favorite monsters: George, Lizzie, and Ralph, along with a variety of new monsters to collect and play. Virtually everything in the environment can be damaged, broken, and utterly destroyed with plenty of hilarious results. Aided by power-ups, the Rampage: Total Destruction monsters are capable of acquiring a number of upgrades throughout the course of a single campaign. Players can annihilate cities all over the world in either one or two player mode in this reinvention of the Midway classic.