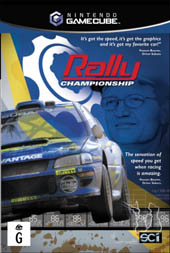 Unavailable
Sorry, this product is not currently available to order
Rally Championship is a unique combination of arcade and simulated style racing. The game, involving 6 different rallies, spans 24 hardcore stages over four separate regions of the world. Race in snowy Arctic terrains in Lapland, Finland; zoom along the Grand Canyon banks in the Rally USA; or enjoy an English sunset in either of the three prestigious British Rally Championship tracks of Scotland, Wales or the Manx. And if that's not enough of a challenge try the 6 additional Safari stages set amongst the great African dirt roads and wildlife.

Jump in the driving seat and experience the power of your selected licensed rally car. There are four completely separate classes of cars to choose from including Privateer, 1600 modified, 2 litre modified, Class A8, or unlock one of the three secret classic models.

Whichever you choose, prepare to feel the adrenaline rush as you challenge your own racing ability and get your driving skills up to speed in 'Quick Race' or 'Arcade' modes before proving yourself as a pro in the 'Career' mode where the bigger your bank balance the bigger the opportunities. Or if you'd prefer to challenge your friends go head to head in the 2-4 'Multiplayer' split screen mode

More cars than any other Rally game, with classics like the Mini Cooper and Audi Quattro lining up alongside all the various competitors from 2001 Rally Championship stages (2.0, 1.6 class) as well as other cars from the 2WD and 2LMP entrants. Cars include, Ford Puma, Peugeot 206 WRC, VW Golf, Renault Megane, Vauxhall Astra, and Mitsubishi Lancer EVO VI.

Superb Car Damage: Damage will impair driver performance as the rally progresses, including bodywork damage (as well as dirt and mud), handling and basic performance.

For the ultimate test, take on the Championship as a Privateer for more involving and progressive play. Enter a rally on a budget and earn the best cars as you progress through the ranks.

All the most grueling Rally locations: face the challenge of the Vauxhall Rally of Wales, Scottish Rally and Manx Rally, or experience the exotic thrills of the USA, Arctic and Safari Rallies.

A selection of exhilarating single play modes ranging from the classic arcade mode to a feature packed simulation where you choose everything from the engine size to the tyre tread.

A huge variety of multiplayer modes: challenge each other's best performance on Time Trial, or go head-to-head in a four player split-screen challenge.

29 officially licensed rally cars including the Subaru Imprezza class A8 cars, the Peugeot 206 class A8 car, Mitsubishi Evolutions and the Ford Escort.

Co-Driver assistance: Let the co-driver worry about what's around the next corner, leaving you to concentrate on the driving.

Highly sophisticated car damage system e.g. radiator damage will cause the car to eventually overheat and the engine to seize.