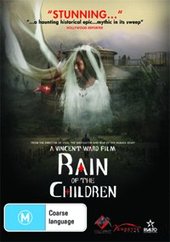 Vincent Ward's “Rain of the Children” is a mature and professional documentary which recounts of the life of Puhi, the woman who was the subject of Ward's early film, “In Spring One Plants Alone”. As a young film maker, Ward acknowledges that he saw Puhi for what she superficially appeared to be; an ordinary old lady caring for her adult son. However, 30 years later, Ward has matured as a film maker and revisits this fascinating subject after her death. He finds that she was far from the simple “old lady” that he had earlier read her to be. As Ward himself says in the film, Puhi experienced some of the most dramatic events in New Zealand's history, and walked between the living and the dead for most of her adult life.

“Rain of the Children” is not only a fascinating account of these important events which occured throughout Puhi's life; it relates these events as they were experienced by an individual, and shows the profound changes that they wrought in her life. Moreover, the film reveals Puhi to be a subject whose life, though able to be retold through a series of events, remains her own. It is aesthetically rich and is a credit to Ward as a film maker.

A great glimpse of early NZ and Tuhoe history. Brillant stuff that should interest every New Zealander.

Well done to Vincent Ward for bring to life the story of a woman brought up in the Tuhoe tribe at a time of great change and hard ship for Tuhoe Tribe. As New Zealand was forming as a Nation the Tuhoe way of life was eroding fast and much of it has been untold.

NZ is full of fascinating stories such as this that need to be told.

If anyone likes NZ history will like this one, it is a film made by a Pakeha called Vincent Ward when he was 20 yrs old and finished the film of some 25 yrs later. I say thank you Vincent Ward for putting together a moving story of the Tuhoe people, and saying it how it is without colour coating the truth. Excellent movie and highly recommended.

3 out of 3 people found this review helpful.
Some Secrets Are Kept Forever…

Vincent Ward's deeply personal and incredibly moving film unravels and re-imagines the story of Puhi, the Tuhoe woman he documented in 1978 for his early film In Spring One Plants Alone. Then she was 80 and caring for her adult son, and Ward was 21, a young art student capturing her traditional way of life…

Puhi believed herself to be cursed, and this unknowable curse is what preoccupies Ward now. Puhi, he discovers, was an extraordinary woman. Chosen by Tuhoe prophet Rua Kenana to marry his son, she survived the 1916 police raid on Rua's Maungapohatu community and went on to have 14 children.