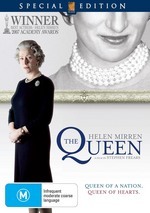 Love it thank you

Tradition Prepared Her. Change Will Define Her.

When news of the death of Princess Diana, undoubtedly the most famous woman in the world, breaks upon a shocked and disbelieving British public, HRH Queen Elizabeth II (Helen Mirren) retreats behind the walls of Balmoral Castle with her family, unable to comprehend the public response to the tragedy.

For Tony Blair (Michael Sheen), the popular and newly elected prime Minister, the people’s need for reassurance and support from their leaders is palpable. As the unprecedented outpouring of emotion grows ever stronger, Blair must find a way to reconnect the beloved Queen with the British public.

The Queen draws on scores of interviews with insiders and expert observers for its intimate, revealing and sometimes humorous portrait of a family in crisis and of a new Prime Minister operating at the height of his powers at a time of extraordinary private grief and public sorrow.

Helen Mirren reigns supreme in The Queen, a witty and ingenious look at a moment that rocked the house of Windsor: the week that followed the sudden death of Princess Diana in 1997. Diana's death came at just the same time that Prime Minister Tony Blair (played by the bright Michael Sheen) was settling into his new government--and trying to figure out the delicate relationship between 10 Downing Street and Queen Elizabeth II (Mirren). A large portion of the British population was trying to figure out the Windsors that week, as Elizabeth remained stiff-upper-lip and largely mum about the death of the beloved princess. In Peter Morgan's skillful script, we watch as Blair grows increasingly impatient with the Royals, who are sequestered in their Scottish estate while the public demands some show of grief. Prince Philip (James Cromwell, in good form) clumsily decides to take Diana's sons hunting, while a sympathetically-treated Prince Charles (Alex Jennings) displays some frustration with his mother's eerie calm.None of this conveys how funny the film is, or how deftly it flows from one scene to the next. Director Stephen Frears (Dirty Pretty Things) deserves great credit for that, and for the performances, and for the movie's marvelous sense of well-roundedness; you could see this movie and groan at the cluelessness of the Royals and their outmoded existence, or you might just sympathize with showing reserve in a world that values gross public displays of emotion. But either way, you'll marvel at Mirren, who makes the Queen far more alert and human than one might ever have imagined. --Robert Horton