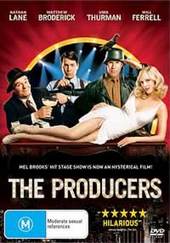 This product is no longer available new.
Available from Marketplace sellers:
The laugh out loud comedy based on Mel Brooks' hugely successful stage play of the same name - which, in turn was based on Brooks' 1967 movie - tells the story of a down-on-his-luck producer, Max Bialystock (Nathan Lane) and his accountant, Leo Bloom (Matthew Broderick) and their 'get rich quick' plan to over-finance a huge flop and pocket the excess budget.

The produce a musical of horrendous bad taste called Springtime For Hitler, written by mad Nazi, Franz Liebkind (Will Ferrell) and directed by the flamboyant Roger De Bris (Gary Beach) who also ends up taking the starring role of The Fuhrer! Butâ€¦the show unexpectedly becomes a smash hit.
Special Features:

"The trend is to convert movies into stage musicals, but The Producers goes a step further: making a feature film of the smash-hit stage musical that was adapted from the 1968 film. The chief drawing card, of course, is Nathan Lane and Matthew Broderick reprising their roles from the stage. Lane plays Max Bialystock, a legendary Broadway producer who hasn't had a hit show in a long time. Enter nebbish accountant Leo Bloom (Broderick), who tells Bialystock he could actually make more money with a flop than a hit. So the two set out to produce the worst Broadway musical of all time, one guaranteed to close on opening night, with the collaboration of an outrageous cast of characters: Will Ferrell as sieg heil-ing author Franz Liebkind, Uma Thurman as Swedish bombshell Ulla, Gary Beach as director Roger De Bris, and Roger Bart as his assistant, Carmen Ghia, among others.
As directed and choreographed by Susan Stroman (who did the same honors on Broadway) and co-written by Mel Brooks, The Producers is laugh-out-loud funny. It's also a relentlessly over-the-top, shamelessly bawdy, stereotype-ridden comedy that may turn off its audience just as much as its centerpiece, Springtime for Hitler, was intended to. But Broadway fans who are used to larger-than-life figures who play to the back row while showering the first row with spit, are likely to forgive and just enjoy the famous granny-walker dance, a supporting cast dotted with Broadway performers (playing a taxi driver is Brad Oscar, who originated the role of Liebkind on Broadway then later played Bialystock), or the mere spectacle of seeing Lane and Broderick memorializing the performances that millions never got a ticket to see. (For maximum laughs, stick around through the closing credits.)" --David Horiuchi
Re-released on
July 12th, 2006
Movie Format
DVD Region
Edition
Aspect Ratio
Director
Susan Stroman
Language
English
Length (Minutes)
129
Stars
Studio
Sony Pictures
Subtitles
English, English - HI, Hindi
Supported Audio
Genre
UPC
9317731031717
Product ID
1516400