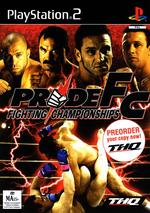 Unavailable
Sorry, this product is not currently available to order
Pride FC pits the top fighters in the world from several different combative sports including wrestling, karate, judo, kick-boxing, and others into one ring under the same rules. The philosophy of Pride, known as ValeTudo, is the acceptance of any technique of any school of combat. Pride is the survival of the strongest.