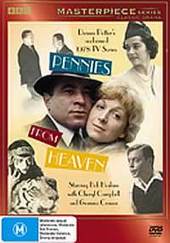 Nothing short of a masterpiece…5 stars

Pennies From Heaven, set in England in 1935, is the story of Arthur Parker, a travelling salesman selling sheet music, who dreams of a life that is so different from his mundane existence. He wants life to be like the songs he loves so much. But he struggles to sell his beloved songs to unsympathetic and unimaginitive shop owners. He then goes home to wife Joanie, who is also rather unsympathetic to his – for want of a better word – romantic desires.

But the fates are about to play cruel games with Arthur. He shows kindness to a homeless, accordian-playing tramp, falls in love at first sight with a customer in a music shop, schoolteacher Eileen, (who he callously seduces and abandons) and a has chance meeting with a beautiful girl on a country road on an idyllic sunny afternoon.

But destiny is about to set in motion a series of events which sees Arthur's, and Eileen's, lives out of control and spiralling downwards into misery. But, in spite of it all, Arthur still has his songs, songs which promise so much but deliver so little.

This is a riveting series, full of surprises, which holds the viewer's attention right to the end.

In Dennis Potter's Pennies From Heaven, Bob Hoskins plays Arthur, a salesman dealing in sheet music who falls in love with a school teacher called Eileen (Cheryl Campbell). When Eileen discovers that she is pregnant and that Arthur is already married to Joan (Gemma Craven) she runs away. Arthur is determined to give up everything to find her again… he believes in happy endings, just like in the songs he loves so much. Special Features: * Commentary on Episodes 1 and 6 with Kenith Trodd (Producer) and Piers Haggard (Director) * Photo Gallery

"Dennis Potter's astonishing six-part miniseries remains one of the edgiest, most audacious things ever conceived for television. The story tells of one Arthur Parker (Bob Hoskins), a sheet-music salesman in 1930s England. Beaten down by economic hard times and the sexual indifference of his proper wife (Gemma Craven), Arthur cannot understand why his life can't be like the beautiful songs he loves. On a sales trip through the Forest of Dean, he meets a virginal rural woman (Cheryl Campbell) he suspects may be his ideal. Ruination follows. Punctuating virtually every scene is a vintage pop song--lip-synched and sometimes danced out by the characters. This startling innovation makes the contrast between Arthur's brutish life and his bourgeois dreams even more dramatic.
Potter's dark vision digs into British stoicism, sexual repression, the class system, and even the coming of fascism in Europe. But it is especially poignant on the subject of the divide between art and reality. Piers Haggard directs the long piece with deft transitions between songs and story. (It was shot partly on multi-camera video, partly on film.) The cast is fine, especially the extraordinary Cheryl Campbell, who imbues her character with keen intelligence and no small measure of perversity. Bob Hoskins triumphs in his star-making part, bringing a demonic energy to his small-time Cockney, nearly bursting his button-down vests with frustration and appetite. Pennies from Heaven was remade in 1981 for the big screen (with Steve Martin), an interesting, Potter-scripted adaptation; it's one of the reasons the original has been unavailable on home video for so long." --Robert Horton