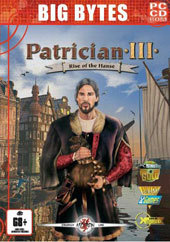 Unavailable
Sorry, this product is not currently available to order
Patrician III is a real-time trading simulation featuring elements of construction and the historical background of maritime trade in Northern Europe during the 1300's. As a resident of a medieval town, your goal is to rise from the status of a simple, insignificant trader to that of a Patrician and perhaps even become the head of the Hanseatic League. You can raise your standing through town improvement and diplomacy or fill your coffers through piracy and smuggling.