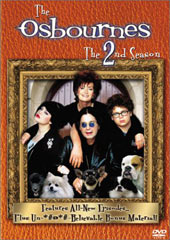 Due to COVID-19, we're unable to accept orders for non-essentials items at this time. Learn more...
America's first family of dysfunction--Ozzy, Sharon, Kelly and Jack--is back for a second season of reality that's even wilder than the first! As the always unpredictable Osbournes again open their doors to MTV's cameras, the result is another 10 hilarious episodes of unscripted insanity! But now that every member of the household is an international star...and a family crisis interrupts the fun...there's a whole new set of situations confronting the famous foursome. Featuring an incredibly hilarious assortment of laugh-packed episodes from the all-new second season, this must-own collection also comes loaded with DVD-only extras and never-before-seen footage that you don't want to miss!