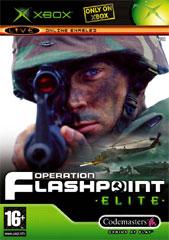 Due to COVID-19, we're unable to accept orders for non-essentials items at this time. Learn more...
In this customized version of the original multi-award wining PC title, gamers are caught in the grips of the Cold War, where a new Soviet regime led by Mikhail Gorbachev, polarizes the political and social ideologies of the country.

Having seized control of an island community, underground resistance groups have mobilized in opposition to the new policies of perstroika and glasnost. The new Soviet government, unable to fight the resistance, calls upon NATO to act as a peacekeeping force and help restore order to the region. NATO responds with Operation Flashpoint. Players assume the role of a NATO private and work their way up the ranks in a variety of missions that range from lone-wolf stealth style missions to eventually commanding a squad and carrying out massive assaults.

Additionally, a prequel campaign titled Resistance, which is set years before Operation Flashpointâ€™s Cold War Crisis, has been added. Resistance creates an additional 100KM2 island and casts the players as Victor Troska, an experienced ex-Special Forces soldier that is forced to lead the ramshackle Resistance effort against the Soviets before NATO becomes involved.