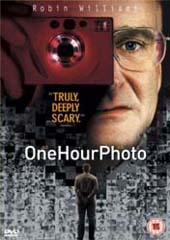 … I warned you. Robbie Williams plays Sy of which I assume is abbreviated short hand for Simon, and he works in a one hour photo department of a department store in urban white America.

This movie takes the viewer through an unhealthy obsession with a regular customers family by this obsessed and clearly deranged individual. This drama suspense tells a story of mental illness of which we today in the world of psychology and medicine still do not really understand and there is no, yet still in 2013, any permanent cure, just continious reptitive treatment.

No more spoilers from me, but a must watch by anyone who wants to be immersed in the world of a psychopathic sociopath living a rather professional but disturbingly private life all by himself.

One customer, Nina Yorkin (Connie Nielsen) is unaware that Sy has been carefully printing off extra sets of her family snapshots for years, adding them to a photo collage he has assembled in his apartment.

Just how far will the lonely Sy go to become part of Nina's seemingly perfect American family unit? Williams gives one of his strongest, unsentimental performances in this psychological thriller/melancholy character study.